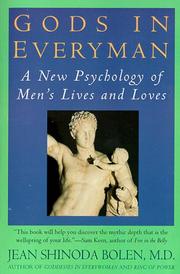 "Gods in Everyman" by Jean Shinoda Bolen will be a permanent reference book for me. Invaluable information for navigating relationships with everyone in our life experiences. This book is organised beautifully and easy to use. I have used this book for about six months now as research for writing. Perfect for gift giving. Thank you Jean Shinoda /5(59). The companion volume to Goddesses in Everywoman reveals the powerful inner patterns, or archetypes, that shape men’s personalities, careers, and personal relationships—offering a insights into Greek mythology, Jungian archetypal psychology, and into themselves and the people in their lives.. A Jungian analyst, Dr. Bolen introduces our inner patterns in the guise of eight archetypal gods. Gods In Everyman Jean Shinoda Bolen In this challenging and enlightening companion volume to the bestselling Goddesses in Everywoman, Jean Shinoda Bolen turns her attention to the powerful inner patterns--or archetypes--that shape men's personalities, careers, and personal relationships.   Buy Gods in Everyman by Bolen, Jean Shinoda (ISBN: ) from Amazon's Book Store. Everyday low prices and free delivery on eligible orders/5(53).

She also stresses the importance of understanding which gods you are attracted to and which are compatible with your expectations, uncovers the origins of the often-difficult father-son relationship, and explores society's deep conflict between nurturing behavior and the need to foster masculinity. In Gods in . Represents the Five Senses: sight, hearing, touch, taste, smell. One of the second group of characters who deserts Everyman in the second half of the play. Angel. Appears at the very end of the play with Everyman's Book of Reckoning to receive Everyman's soul. Doctor. A generic character who only appears to speak the epilogue at the very end of. Everyman Summary. Everyman is a morality play, which details the life and death of the allegorical Everyman, who embodies all of humanity.. Death warns Everyman that he will be judged by God when. Get this from a library! The first century: emperors, gods, and everyman. [William K Klingaman] -- A history of the major events and people at the time of Jesus, the Roman Empire, and the Han Dynasty.